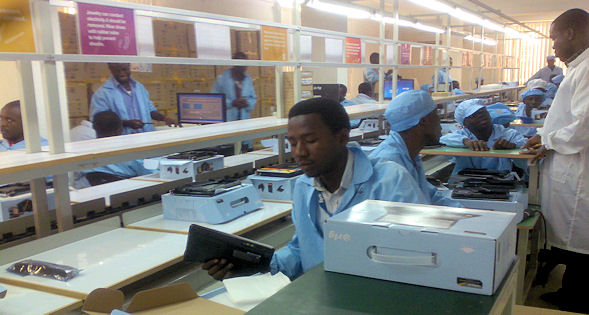 Accra based rlg Communications is offering lessons on how indigenous ICT companies can open sustainable pathway to ensuring Africa’s presence in the global ICT industry. SEGUN ORUAME writes from Accra after a tour of its factory.

The conventional image of Africa in a typical western media is that of a continent lying prostrate; wracked by famine, wars and hunger. The west paints a landscape of a huge population of uneducated and unemployed youths. But that image, extremely strong in the 80s, is fast eroding in the 20s, and giving way to a continent slowly but gradually embracing a new economic fillip. One of the companies driving that change is rlg Communications. The Osu, Accra based computer and handset manufacturer is modeled to generate mass high-skill employment for thousands of African youths and meet the rising demands for computers and other devices.

The rlg Communications opened shop in 2004 but it was not until 2008 that its first brand of mobile phones were unveiled and launched into the market. That launch would officially mark its forage into Ghana’s bustling ICT market where mobile phone subscription is tipping over 20 million. “The market potential is great,” says rlg chief architect and chairman Roland Agambire.

“But governments must be a major driver of exploring the existing potential through clear and strong support for local entrepreneurs that have designed their business on achieving some of the key objectives of governments for economic transformation: employment generation and local production of goods including hi-tech products,” argues Agambire in rlg’s Osu factory where more than 300 Ghanaian youths are gainfully employed to produce the rlg brand of handsets and laptops.

Ultimately, rlg Communications targets employing 30,000 youths in one of the most ambitious recruitment drive and capacity building on the continent. They will be working at the rlg manufacturing assembly plant as production gathers steam and market penetration expands in the months ahead. The factory currently run shifts to keep up with production targets, says Products Development Manager of rlg Communications, Mr. Aweisu Yakubu. Even then, with demands growing rapidly and the factory needing more space to up production, non-factory departments will be moving out of the Osu-Accra building soon to make room for just the plant section, says Plant Engineer, Isaac Okine who recently joined rlg Communications from Nokia in Europe. He beefs up the technical team of rlg Communications which already boasts of some of the continent’s best hands with vast experiences in the biggest brands on the globe.

Outside its Osu –Accra head office, rlg Communications has branch offices in all of Ghana’s ten regions where it seeks to consolidates on its market acceptance for the rlg brand. Each branch has a minimum of eight and a maximum of 16 sales and service centers which are all managed by trainees of the regional training institutions to give it a greater edge than all other brands seeking to up their margins in the Ghanaian market.

But it is in nearby Nigeria that the rlg brand is fast working to create a pan-African brand. With its large market and expansive appetite for technology products, Nigeria holds great prospect for rlg that it is not overlooking. It has already sealed a deal in The Gambia, another ECOWAS family member to foster the brand round its founding theme of building local capacity and creating more affordable products that could compete with other global brands. It’s Nigerian presence will see it partnering with some of the state governments to train thousands in hi-tech skills and rollout computers and mobile devices from locally sited factories. It already has inked a deal with the Osun State government in south-west Nigeria.

rlg Communications was founded over a decade ago entirely on building local capacity first and then using the skill subsets to drive indigenously owned technology factories. That model has worked for both rlg Communications and the Ghanaian government. The ultimate beneficiaries are thousands of youths that have acquired the skill to either work in the factory or to run their own enterprise in the production chain as marketing or technical services providers.

The company regularly undertakes training in sale and repair of mobile phones targeting the youth in all of its branches across Ghana the as part of its contractual agreement with the Ghanaian government as the sole implementer of the ICT Module of the National Youth Employment programme (NYEP) financed by the Ministry of Manpower Youth and Employment and its partners. The project is aimed at training the youth in mobile phone repairs and servicing with the key objective of equipping the unemployed youth with employable skills in mobile phone repairs, managerial and marketing skills that will guarantee financial freedom. It was initiated in 2008 as part of the overall scheme to reduce the nation al statistics on unemployment and improve local content in ICT. About 30,000 youth have already benefitted since the programme was initiated.

The Public Private Partnership (PPP) has, in turn, positioned rlg Communications to be government’s chief partner in realizing the goals of the Better Ghana Agenda ICT Project designed to increase the integration of ICT into Ghana’s national economic life whether in the education and research sector, public administration including the civil service and the health sector among others. The first phase of the project entails the production of about 60, 000 laptops to help drive efficiency in the sectors they are designed to be deployed.

The project has helped rlg Communications to strengthen its market value and prove its driving philosophy true: training first and then the jobs and then the products. As Agambire himself will say, “the company has fashioned out an integrated and robust exit strategy for the beneficiary youth under the module that would be engaged as instructors in the ever-expanding rlg Institute of Technology, employed as technicians and factory hands on the plant … [or be] set up at independent sales and service centers in demarcated territories.”

Agambire thinks rlg Communications’ success story in Ghana has helped to define a pathway that could significantly opened a new chapter of growth in how Africa engages to enter the new economic order. Government must work with the private sector to engineer new ideas into realistic and achievable goals.