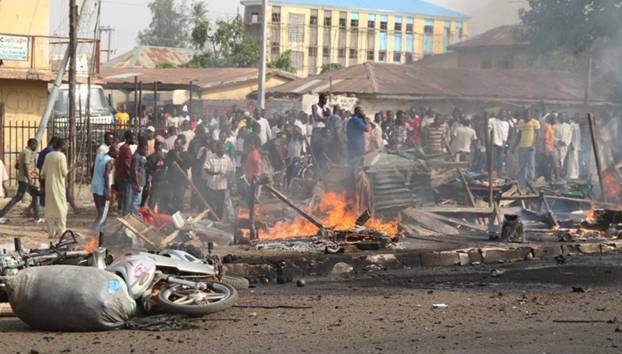 ‘GOVERNMENT PRAISES ITSELF FOR IGNITING THE TELECOM REVOLUTION BUT FORGETS THE SOUR IMPLICATIONS OF A TELECOM SECTOR THAT COMPLETELY FEEDS ON EXTERNAL FACTORS MAKING IT A SECTOR THAT IS 100 PERCENT FOREIGN DEPENDED.’

Eleven years ago, I penned this article on the tragedy that has befallen our motherland. Terrorists held away with guns and bombs while ordinary citizens are cowed. You could feel that sense of helplessness on the social media as citizens lamented and shared gory images of victims of terrorist attacks. Today as we go to press and under a new political leadership that is barely three days in office, the bombs are still falling – lives are being wasted. But there is a ray of hope that the long night could be ended now. This article is re-published in that hope.

I am in Jos January 2011.  The fires of hatred are still burning. The Internet is abuzz with news reports on the killings, the bloodlettings and the ‘ever-reassuring’ statements of governments at all levels that would not dry the tears of those who have lost relations and friends.

On the Internet; several websites; there are gory pictures of decapitated bodies; videos of decomposing torsos – all testimonies of the failure of the political elites and the national leadership to address a seeming collapse of state security and the guaranty of liberty and life. The world sees Nigeria from the gory images of Jos and concludes that Nigeria is in transition to its disintegration.

Jos has become symbolic of the crass opportunism; absence of vision and insufficiency of willpower among the political class to lead the country as one united federation.  Most importantly, it is revealing of the evil of corruption on the state; the distortion of values by a leadership steeped in larceny; and the erasure of the required capacity to lead a-right.

The thousands that have been brutally murdered in the yearly Jos mayhem are all from the class denied access to national power and national wealth.  All victims of the injustice of decades of mismanagement of the national wealth by a few powerful elites; if you carefully read the online reports and the videos on Jos, you will see the tragedy that has become this country; our country, called Nigeria and why the New Media must be a rallying tool for Nigerians to come together to erase the evil –a lecherous political class- that have happened upon us in the 50 years we have existed as one country under a body of leeches.

It is that evil Mrs. Hilary Clinton, the US Secretary of State, attacked in Abuja during her visit to the country several months back.  I share this piece again with you in the belief that those who hold this country hostage can be removed only by a common understanding of what constitutes our common foe. That common foe that rendered Odi desolate; made millions of youths that could have been IT experts militants in the Niger Delta creeks; or those other millions, the almajiris, who must begged to live in the north and even those millions in Lagos, jobless graduates waking up every day to a life of prostitution and drugs.  It is that common foe Mrs. Clinton attacked in Abuja those eerie days that have remained part of us. Read!

Mrs. Hilary Clinton’s words cut like blade.  Corruption has destroyed everything great we could have been as a nation. Billions of dollars stolen from the public till by private individuals in government and their cronies have effectively rendered a generation of young Nigerians and the children they would beget worthless.

Many will never go to school or be able to get their children into school because the perfidy of leadership has mortgaged their potential to be educated or get their children educated.  Clinton rightly noted that there is too much theft and power at the top among very few individuals that has left too many people, over 140 million of them, helpless and bereft of hope.

She spoke the same week Nigerian authorities were trying to smolder out the last trace of elements of Boko Haram who had held sections of northern Nigerian hostage for days.  Clinton tried to draw a link between the failure of leadership, the collapse of the state and the rising upsurge of radical political and religious elements whether in the north or the south.

But the leadership, far too gone on the highway of larceny, was deaf to the truth.  The billions that have been stolen could have provided steady power supply that has been the bane of quality service in the telecom sector.  In a generator economy, network operators power their base stations on diesel power generating sets; banks sustain their electronic transactions on noisy diesel generators with which they hold an entire community hostage to noise and air pollutions.

Now and then, government talk about youths empowerment within the framework of a lame 7-point Agenda that conveniently empowers the youths with motorbikes from Chinese factories where millions of Chinese youths have found an employment and a future.  As for our own youths, they ride themselves to death with the hapless passengers they lead to early grave on that monster machines politicians have given them to provide shadowy employment.

Government praises itself for igniting the telecom revolution but forgets the sour implications of a telecom sector that completely feeds on external factors making it a sector that is 100 percent foreign depended. The equipment that runs the sector come from Chinese, Indian, Swedish, American, English and Nordic countries; so too the handsets. The only thing that is local is the market; a very green market indeed.

While we help to keep the ICT factories in Asia and the western world running and sustain the prosperity of their youths, our own youths forfeit their own future owing to the denial of destiny that corruption in government causes millions of lives.

Today, we lament the rise of militancy in the Niger Delta region and the increasing fires of Islamic fundamentalists in the north while we forget that the causative factors are in the blatant abuse of power and executive larceny at the federal, state and local levels of government.  Civilian Power indeed has brought nothing to the people of Nigeria. And democracy has brought sorrow and blood. It has denied them their rights to dignity and prosperity. It has created monster-thieves out of ordinary individuals and helped to widen the gap between the have and have-not.

Democracy has provided the falsehood upon which several fake ICT Youths Empowerment Centres have been built.  It has flowered a generation of new tech-merchants that have brought no value to the society’s slow evolvement from ordinary analogue telephony to a more sophisticated digital economy. Democracy has helped to create an army of fanciful thieves with fanciful titles that are now heirs to government’s digital engagements.  Government has found its digital engagements a lucrative conduit to siphon ill-gotten wealth into private bank accounts abroad.

According to one report on corruption and development in low income countries, Nigeria potential for growth was reduced by about 98% between 1985 and 2005; 20 horrid years that witnessed the siphoning of national wealth in excess of trillion US dollars by the military and their civilian collaborators. Two terrible decades that created a new class of super rich military and civilian class and the consequence of their abuse of state power and mismanagement of the common people to sustain their grip on power and pool of wealth. Today, the national polity is poisoned by the avaricious antics of this class and their children to maintain the new status quo created in the 80s and for which we suffer and die as ordinary citizens.

Because government steals and rip apart the people’s common vision of themselves to prosper; they seek for alternatives outside of the common pool. They rebel against government and institutions that have denied them access to life; they reject a system and a tool that appears to have fostered the monsters who daily deny them access to the common wealth and thus; they reject western education for all it stands for including the educated and political elites who have done nothing but loot state treasuries and render destinies worthless.

Because the leadership has denied millions of Nigerian youths access to functional education and right to IT literacy, they have taking up the guns to keep their idle hands busy. And today they hold hostage the state and millions who like them have been rendered stranded by a wicked and irresponsible political elite. I dare say Boko Haram is a direct consequence of the education and IT literacy Haram that the state and its agents have committed against ordinary Nigerians.