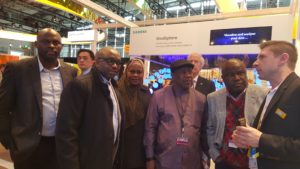 With sliding revenue in crude oil export, Nigeria is seeking to thicken its GDP value from non-oil sectors particularly ICT.

At this year’s CeBIT 2016, a Nigerian delegation led by the Acting Director-General of the National Information Technology Development Agency (NITDA), Dr. Vincent Olatunji, was themed on broadening the local IT market for global investors.

Olatunjiwho represented the Honourable Minister of Communication, Barrister Adebayo Shittu.met with the management of Deutsche Messe, organisers of CeBIT, to explore ways of collaboration and how Nigeria as a country can actively play and participate at CeBIT, the world’s leading information and communications technology conference and expo.

Dr. Olatunji told the organisers that Nigeria is looking towards ICT as a very good avenue to tap into so as to shore up her revenue inflow especially as price of oil is falling at the international market. As one report notes: “More than 80 percent of Nigeria’s GDP growth over the course of its modern boom has been from the non-oil sectors, including services, manufacturing and agriculture.” The ICT sector booming with over 160 million phone subscribers underscore a waiting market for the largely untapped ecommerce sub-sector and the other vistas of ICT.

“One unique feature of Nigeria is a huge population of nearly 180 million people who are very IT savvy. And, currently the government is looking for alternative revenue channels to oil, hence the government is ready to support the activities focused on ICT.

“And, backing up the government’s efforts, stakeholders in the private sector are coming up with various solutions. So, I think CeBIT is the platform where we can really showcase and promote what we have; and even look for markets for what we have in Nigeria; look for investors for the young innovators that are coming up; investors that will say if I put in this amount of money in this idea or solution, in the next five or 10 years, this is what will likely be the turnover for me,” said Olatunji.

“Because the market in Nigeria alone is enough to convince an investor to say I really must go into this market; Nigeria is like putting five to six countries in Africa into one country, because of the population. And a very high percentage of the population are the youths, and they are really ready and willing to adopt and use ICT.

“In fact, their presence is a clear testimony to government’s overall preparedness and willingness to adopt ICT as a reliable alternative to oil for economic growth, for earning foreign exchange and for growing a self-reliant population.

“We are glad to further assure you that we will work with you on the part of the Agency in implementing government’s policies in the area of ICT development in Nigeria.

“For CeBIT 2017, we will start working towards it immediately; we will not wait till close to 2017 before making the moves. In particular, we are very keen on working to bring our young innovators to CeBIT 2017 as a country, among other key areas to showcase.”

Speaking on his impressions of CeBIT 2016 and the impact it could have on Nigeria, Honourable Mohammed Onawo, the chairman, House of Representatives Committee on ICT said:

“I am particularly excited that I have attended CeBIT 2016; and with what I have seen, it has encouraged me to take a lot of things back home. One, the digital economy. While we were going round on the guided tour, we visited SAP; and they demonstrated to us software where everything that is done in government can easily be monitored. I was excited about that; because what makes most of our governments fail in the Third World is lack of proper monitoring.

“For instance when budgets are not monitored, a lot of things are done under assumptions; results are not achieved at the end of the day. And, I will really want to take that back home.”

“From there, the best will emerge, that can present something international, that is those that can represent us will emerge from there; and will be selected to come down here. If that is done, a lot of young people who have ideas, but do not know how to bring them out can be encouraged to come out with such ideas.”

“The opportunity of being at CeBIT 2016 is really commendable. I’m coming to CeBIT for the first time. What we witnessed today while being given the guided tour was amazing. I compare it to what happened in my country some months ago – and I thought if the guy in question was in Europe or America probably investors would have identified his talent.

“This Nigerian in a rural area in the country, manufactured an aircraft, and everybody watched in amazement; and, like a joke, he was able to fly the aircraft. He tried it once; the second time, it landed on water. When he was interviewed, he said that is IT (information technology). But if nobody identifies him that’s how he could remain with his initiative.

“So, I thought about this guy; and, my feeling is we need to pick up such talent that has been identified; these are the young innovators we are talking about. And there are several of them like that across our country. So, our hope is that by the time we are coming for CeBIT 2017, we would have a good story to tell,” Senator Buhari stated.

The NITDA Acting D-G further explained that the agency’s annual lead event for 2016, e-Nigeria, is themed and focused on young innovators. His words:

“Incidentally, the focus of e-Nigeria this year is on Young Innovators, where they will pitch, for three days, in a competitive atmosphere.”

The delegation, which included ICT stakeholders, regulators, as well as the chairmen of the ICT Committees in the Senate and House of Representatives, Senator Abdultfatai Buhari and Honourable Mohammed Onawo, Executive Commissioner of the Nigerian Communications Commission, Engr. Ubale Maska and the Director, Customer Affairs Bureau of NCC, Mallam Abdullahi Maikano, Dr. Agu Collins Agu, Director, Infrastructure and Technical Support Services, NITDA as well as  Mrs. Hadiza Umar, Head, Corporate Affairs of NITDA, had earlier been given a guided tour of selected but leading exhibitors, including Huawei, Tesla, SAP and Intel, among others.

The five-day CeBIT 2016 conference, which put digitisation at the top of the business, political and social agenda, featured more than 500 concrete examples of digitisation and the Internet of Things, where it was reported that in the coming years, more than 50 billion objects will likely be connected with the Internet, with 90 per cent of added value being created in the B2B sector.

“We have saved N16.8b through enhanced ICT procurement process” – Buhari at eNigeria 2019