There are no plans to shut down the internet during the forthcoming 2019 elections, the National Security Adviser (NSA), Mr. Babagana Monguno, has said, over the weekend, in Abuja ostensibly in reaction to statements by opposition parties and social media posts that have gone viral since the beginning of last week. 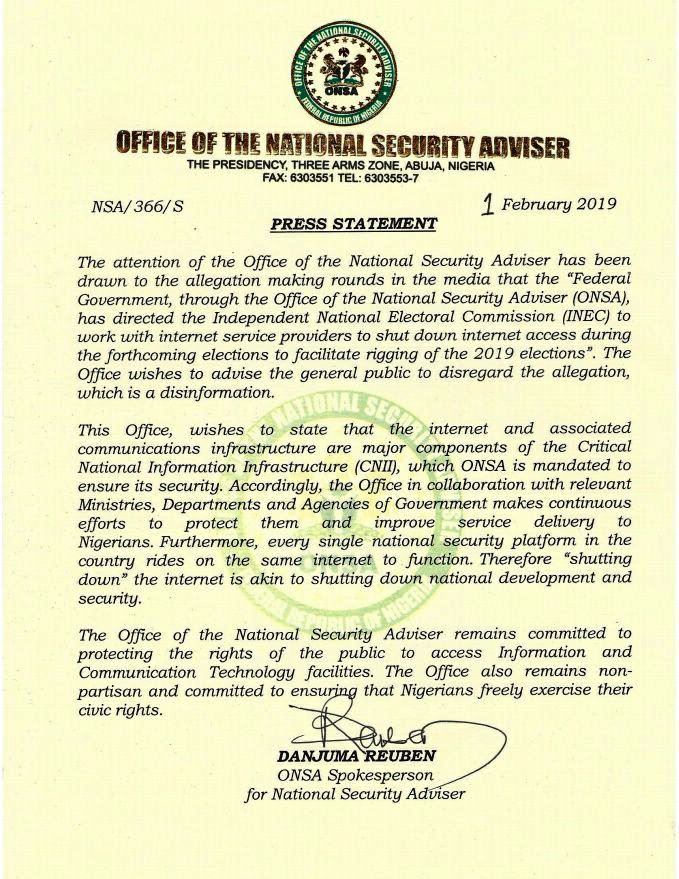 Governor Nyesom Wike of Rivers state has also accused the federal government of plans to “shut down” the internet to enable it rig the elections.

“The National Security Adviser has met with INEC to ensure that internet service providers shut down the internet so that foreign bodies won’t see what is happening in the country during the elections.

“They will jam all the frequencies and internet services to stop real-time communication during the elections,” said Wike when Savannah Centre Council on Peaceful and Violence Free in Nigeria paid him a courtesy visit to Government House in Port Harcourt.

But the NSA, in his reactions, has asked Nigerians and other stakeholders to dismiss such insinuations. The internet as a critical infrastructure should be protected not shut down, said Monguno even as his office issued a formal statement to that effect.

“The internet and associated communications infrastructure are major components of the Critical National Information Infrastructure (CNII), which ONSA is mandated to ensure its security,”

“Every single national security platform in the country rides on the same internet to function. Therefore “shutting down” the internet is akin to shutting down national development and security,” said the NSA in the statement signed his spokesperson, Mr.Danjuma Reuben.