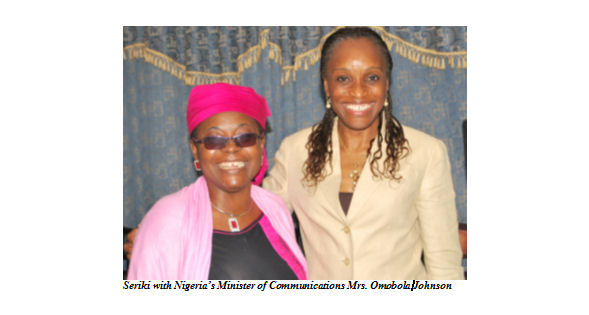 Technology titan, Mrs. Florence Seriki, is the ‘Woman of the Year’ at the7th African Icon of our Generation Award 2012 that held recently at Transcorp Hilton, Abuja. Seriki was honoured for her resourcefulness and contribution to economic advancement of the continent in an award ceremony that also recognized the likes of Mrs Dooshima Yemisi Suswam, first lady of Benue State who was honoured with the ‘First Lady of the Year award, Prof Hilary Odo Edeoga, Vice Chancellor of the Year Award, Dr Ibrahim Garba Kurmi, Public Service Order of Merit award and Hon Aminu Atabo, who also got the Public Service Order of Merit award.

Seriki, founder and CEO of Omatek Computers Plc, is considered a role model and a great inspiration for the female gender in the ICT industry that is largely male-dominated. The award is coming the same time that Omatek Computers Plc is celebrating 25 years of existence. Omatek is commemorating its Silver Jubilee as it tidies up plans to move into a new factory to consolidate on its achievements and its extensive presence in Nigeria. The company remains the only quoted computer company on the Nigeria Stock Exchange. It has led the increasingly competitive Nigerian ICT market as the only company in East, West and Central Africa that produces computers and casings from completely knocked down (CKD) components sourced from the highest grades of manufacturers to give all Omatek computers the requisite world-class standards comparable to any other foreign brand.

Since it entered the competition, Omatek has grown to become one of the continent’s leading brands. With a factory presence also in Ghana as part of the company’s pan-African vision, Omatek has won global accolades including the endorsement of the International Telecommunications Union (ITU) as a driver of technological change in Africa. From software giant Microsoft, Omatek also got recognised as the No.1 PC manufacturer in the West and Central Africa (WECA) region.

“We have gone through different growth circles in the last 25 years and have remained committed to building local capacity and bringing first class Nigerian made products to the market. Our new factory to takeoff immediately will include the new Solar Panel and the new LED bulbs and lighting factories. Our 24 hour Solar/Inverter/battery hybrid solution is a great innovation and is pioneered by Omatek and the first of its kind in Africa. This by itself is major income revenue to providing 24 hour light and power to homes, offices, schools, hospitals and hotels among others,” said Managing Director and CEO of Omatek Ventures Plc, Mrs. Florence Seriki in Lagos to announce a new phase of growth for the company .

Omatek with strong performance record in Nigeria’s public sector was described about six years ago by then President Olusegun Obasanjo as a product of “vision and resilience,” during the official launch of the Omatek brand in Nigeria by the former president in Aso Villa, Nigeria’s seat of power. Describing Omatek as a testimony that government’s policy of having a private sector led economy was working, Chief Obasanjo said Omatek had proven that the capacity to join the information society was readily available and all that was needed was governments to create an enabling environment for the private sector to drive the needed change as the Nigerian government had done. According to Obasanjo, Omatek has created a benchmark for other enterprises.

Tidying up on its financials with funding instruments from offshore and local partners, Omatek, which recorded over a billion naira turnover last year from not just its existing computer products but also from its newly innovating products such as the 24 hour Solar/Inverter/battery Hybrid Solutions sold to schools, offices and homes, said it was re-kitting its financial base to enable it consolidate and expand its portfolio of services available through its Consumer Scheme Finance and Omatek Resource Centres.

Seriki, currently president of the Information Technology (Industry) Association of Nigeria (ITAN), said Omatek has remained consistent in meeting the industry’s challenges. She said the Omatek Factory has come up with various initiatives to drive and sustain the Minimum Order Quantity (MOQ) requirement of the First Class Manufacturers of Raw Materials. One of such initiatives is the Omatek e-Xpress consumer scheme designed to assist Nigerians own computers through a convenient payment plan which spans between 12 – 24 months. She assured that in its new factory, Omatek will continue to grow local capacity and local content in its push to drive support for made-in-Nigeria ICT products.

Up goes the price of talk and data as Nigerian government applies new 7.5% VAT

Want to Maximize Your Financial Capacity in 2018? Join FirstBank today!