News Report
February 4, 2015
Posted By: ITEdgeNews 0 Comment Online thugs on the prowl as 2015 elections draw near
Share this story 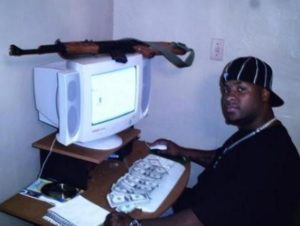 As the 2015 general elections remain a few days away, political thugs have taken over the cyber space channeling insults and threats to each other. A situation, Ehiedu Anagu, an Abuja based political analyst said is worrisome.

Cyber-thuggery is helping to fuel tensions; deepen the intensity of hate speech and practically forcing people to relocate as the elections draw near, said Peju Adebayo, an Abuja based online commentator. Thousands of people have either moved or made plans to move from flash points in the north and south of the country.

Anagu recalled that a decade ago, most elections conducted in Nigeria were characterized by thuggery, which were done on the streets and election days but the trend has changed. “Nigerian politicians are now arming their supporters with laptops, smart phones and internet connections. This has shown that political thuggery has gone digital,” he claimed.

He added that politicians have turned to the country’s pool of unemployed millions to recruit young people who will aid their ambitions, saying squads of young people are being recruited across the nation to storm cyberspace; to harass, intimidate and persecute their employer’s opponents or those with views that oppose his ambitions.

“For many Nigerians today, being an “internet warrior” is a full-time job. Some work from home; others work from an office – many of these people works round the clock. Most of these hirelings have about 10 different pseudonyms each for news websites and blogs, but fewer for Facebook and Twitter,” he said.

He argues that in this type of thuggery, bones are broken, blood is not split, ballot papers are not carted away, but just online bully where they will be able to manipulate the electoral climate.

Nigeria to set up new agency for robotics and artificial intelligence