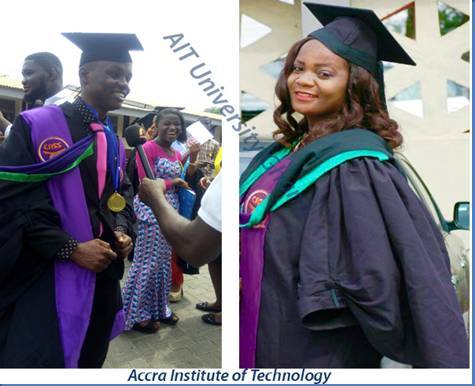 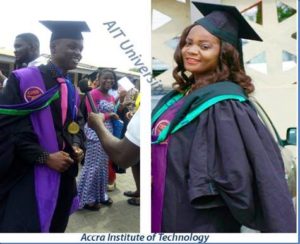 Two Nigerians have won the top prize at the 9th Graduation Congregation of the Accra Institute of Technology (AIT), a leading technology-focus private university in Ghana. The event held at the Ghanaian capital city over the weekend.  In a statement released by the University,  Mr. Peter Hunnoho Moses, who graduated with a First Class Honours Bachelor of Science Degree in Information Technology was judged the overall best student of the graduation class with a cumulative GPA of 3.99. The overall best student in the Female category went to Ms. Odinaka Abel Favour who graduated with a First Class Bachelor of Science Degree in Business Administration with a cumulative GPA of 3.90.

In his speech to the congregation, which saw the graduation of  Bachelor’s degree holders and PhDs, Professor Clement Dzidonu, the President of the University observed that this is a major achievement given that, AIT has the toughest and the highest grading system within the university system in Ghana. ‘To get an A grade in a subject at AIT you must score above 90 and to get a First Class with a cumulative GPA close to the maximum 4.2, means that a student must consistently get A grades across the board’, Professor Dzidonu noted.

The Deputy Minister for Education, responsible for Tertiary Education, Hon. Samuel Okudjeto Ablakwa, who was the Special Guest of Honour, congratulated the university for mounting mainly science, technology and engineering programmes which in his view is in line with the Ghanaian government’s determination to implement and enforce the 60:40 policy guidelines aimed at giving priority to science, mathematics and engineering programmes in our tertiary institutions.  He announced that in line with this, the Ministry of Education through the National Accreditation Board (NAB) and the National Council for Tertiary Education (NCTE) has drawn-up new guidelines that will ensure that the accreditation of new universities and academic programs meets these guidelines. ‘To be approved for accreditation, a university must more or less show that it will be like AIT in its academic program offerings’, he observed.

The Deputy Minister also congratulated those receiving the overall best graduating student awards and noted that, Ghana is currently attracting over seven thousand foreign students from close to sixty countries to its private and public universities annually. He announced that the government is mindful of the internationalization of higher education and the Ministry of Education is empowering its statutory higher education regulatory bodies to ensure that the high academic standards of a number of the Ghanaian universities including AIT are internationally benchmarked to continue to attract more foreign students.