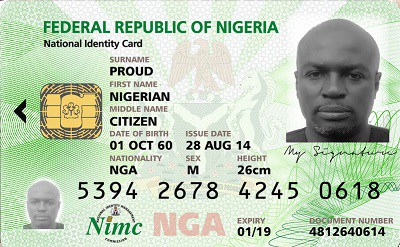 By Oluwatobi Opusunju and Chinedu James

Go get your National Identification Number (NIN) or risk being denied access to your bank accounts including your salaries. All identity (ID) based transactions will soon become permissible only by the use of the NIN. The NIN is a set of unique numbers issued by the National Identity Management Commission (NIMC) to individuals/citizens who have registered with it. The NIMC captures the digital identity of all citizens and issued them the NIN as their unique digital identity.

The NIM is designed for citizens’ registration as part of government’s national strategy to build database on all citizens for enhanced economic planning. It consists of 11 non- intelligible numbers randomly chosen and assigned to an individual at the completion of enrolment into the National Identity Database (NIDB).

By law, under the NIMC Act No 23 of 2007, all citizens and residents must have the NIN to conduct ID based transactions. Beginning from the first quarter of this year, the NIMC has announced that it would begin the enforcement of the law that makes it mandatory to have the NIN to conduct transactions that are bank-based, online (ecommerce-based) and even acquisition of international passports among others.

But only about 28 million Nigerians have their digital identity fed into the NIDB and issued NINs, a figure which represents about 15.5 percent of the country’s total population.

According to the Director General/CEO of the NIMC, Engr. Aliyu A. Aziz, the NIN bequeaths citizens with a lot of privileges and benefits. Some of the benefits include one-person-one-identity, ability to verify and authenticate individual’s identity, access to services, claims and entitlement and benefit from government social interventions.

Aziz urged Nigerians to take advantage of the over 900 enrolment centres across the 36 states and the Federal Capital Territory to enroll for the NIN. This would allow them ease of doing business as well as ensure social and financial inclusion in a way that further enables the country to tackle security challenges.

“The commission had recently gazetted and published supplementary regulations which consist of the set of principles, practices, policies, processes and procedures that would be utilised to achieve the desired objective of enforcing the NIN,” said Aziz.

The push for the mandatory use of the NIN within the private and public sectors is being enhanced by the work of the harmonisation committee set up by the federal government and charged with harmonising all identification data across all ministries, departments and agencies (MDAs) particularly those of immigration, banks, and telecom companies among others so as a provide a single for data harvesting and management. This will eliminate multiple data gathering and data duplicity within the MDAs.

In December, 2016 when the enrolment figure stood at only 14 million, Aziz had set a target to capture 28 million and double the number of Nigerians and legal residents with NINs. That target was met by December 2017. NIMC is now working with a new target to enroll additional 50 million Nigerians and legal residents and issue them the NIN by December, 2018.