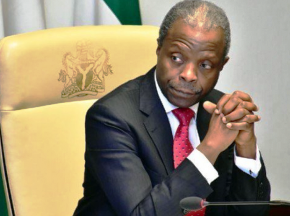 Beginning today, this week in United States, Vice President Yemi Osinbajo will open talks with investors at the Silicon Valley in San Francisco and Hollywood in Los Angeles, California as part of the moves to further open up Nigeria’s technology and entertainment sectors to global interests.

The visit is under the auspices of a public-private sector collaborative investment roadshow to the U.S.,where Osibanjo will be leading members of the recently inaugurated Advisory Group on Technology and Creativity, a sub-unit of the National Industrial Policy and Competitiveness Advisory Council, to hold talks with global industry leaders in ICT and entertainment.

A statement, over the weekend, by the Senior Special Assistant on Media and Publicity to the Vice President, Mr Laolu Akande, said the event is designed to primarily showcase the improvement in Nigeria’s business environment to entrepreneurs, investors and business leaders in both cities of the U.S.

In Osinbajo’s team are the Minister for Industry, Trade and Investment, Dr Okey Enelamah and the Special Adviser to the President on Economic Affairs, Dr Adeyemi Dipeolu.

According to Akande,  Osinbajo would emphasize on a number of the Buhari administration’s policies such as the Ease of Doing Business reforms, which have improved the country’s ranking in the World Bank’s Ease of Doing Business Index 2017. Nigeria’s World Bank ranking climbed up 24 places and was placed on the list of 10 most reformed economies globally.

Also, the report noted that Nigeria made significant progress across several indicators comprising starting a business, dealing with construction permits, getting electricity and property registration.

“It would also focus on collaboration between Nigerian and US companies in the areas of technology and entertainment, including further cooperation between Nigeria’s film industry, Nollywood, and U.S. Hollywood in the areas of production, distribution and content protection….. Another objective of the investment mission is to attract Africans in the Diaspora to mentor and support start-ups in Nigeria,’’ said Akande.

Kaspersky in Nigeria with advanced solution to detect targeted attacks