JP Morgan held the top rank in the latest M&A league table of the top 10 financial advisers for the information and communication technology (ICT) sector for FY2018, compiled by GlobalData, a leading data analytics company.

The New York-based financial institution took the top spot with a total advised deal value of $236.4bn for advising on 62 deals—the second highest in the sector in 2018.

According to GlobalData, which tracks all merger and acquisition, private equity/venture capital and asset transaction activity around the world to compile the league table, Morgan Stanley and Goldman Sachs stood second and third, advising on deals worth a total of $232.8bn and $206.9bn, respectively.

Prakhar Baghmar, Financial Deals Analyst at GlobalData, said: “The growing influence of technology was reflected in about 70% jump in the total deal value in the ICT sector in 2018 as compared with 2017. Significant deal activity also pushed deal values for advisers, with six financial advisers and three legal advisers being involved in more than $100bn deals each.” 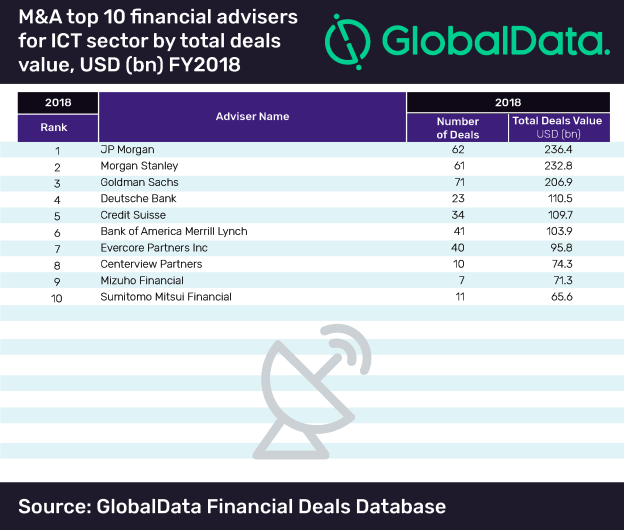 Goldman Sachs, which is placed third in the ICT Deals league table, ranked first in the global list.

GlobalData league tables are based on the real-time tracking of thousands of company websites, advisory firm websites and other reliable sources available on the secondary domain. A dedicated team of analysts monitors all these sources to gather in-depth details for each deal, including advisor names.

To ensure further robustness to the data, the company also seeks submissions from leading advisors, through an advisor submission forms on GlobalData, which allows both legal and financial advisors to submit their deal details.

4,000 of the world’s largest companies, including over 70% of FTSE 100 and 60% of Fortune 100 companies, make more timely and better business decisions thanks to GlobalData’s unique data, expert analysis and innovative solutions, all in one platform. GlobalData’s mission is to help our clients decode the future to be more successful and innovative across a range of industries, including the healthcare, consumer, retail, financial, technology and professional services sectors.