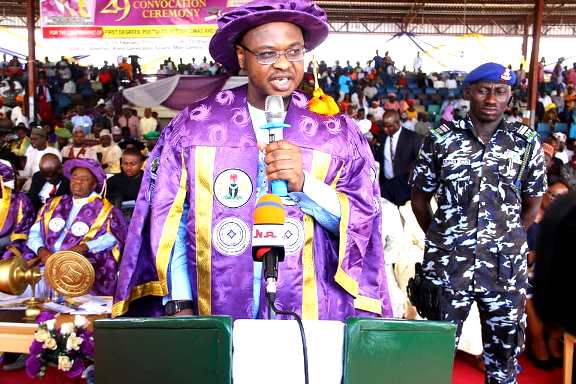 Nigeria’s economic prosperity with security is tied to how much of data is produced and used in the country’s public and private sectors, said Minister for Communications and Digital Economy, Dr. Isa Ali Ibrahim Pantami. Pantami was the distinguished speaker at the recent 29th Convocation Lecture of the Federal University of Technology (FUT), Minna, Niger State.

Africa’s most populous country of over 200 million people ignited a data-centric economy last year as it unveiled the Nigeria Data Protection Regulation (NDPR), through the National Information Technology Development Agency (NITDA). The data regulation set the tone for data gathering and utilization in both the public and private sectors.

While speaking on ‘Datafication of Society: Economic and Security Issues in Producing and Using Public and Private Data in Nigeria,’ Pantami submitted that as various data of citizens are being generated in the current digital economy being driven by ICT, managing such data and making the economy data-driven holds great potential for the country’s economic prosperity and enhancement of security architecture.

“Datafication of objects or data transforms their purpose and turns the information into new forms of value”, said the minister who also represented the university’s special visitor: President Muhammadu Buhari.

He affirmed that digital economy is now widely accepted as the single most important driver of innovation, competitiveness and economic growth. This explained why the new mandate of the ministry is the development of the economy, leveraging technology, in line with the Economic Recovery and Growth Plan (ERGP) of the government.

Pantami enumerated the eight pillars of the National Digital Economy Policy and Strategy (NDEPS) recently unveiled by President Muhammad Buhari to include developmental regulation, digital literacy and skills, solid infrastructure, service infrastructure, digital services development and promotion, soft infrastructure, digital society and emerging technologies, as well as indigenous content promotion and adoption. He contended that Nigeria is moving into an era where the wealth of the nation will be measured by digital resources and the innovation of Nigerians.

Pantami particularly explained that the 6th item of NDEPS – the soft infrastructure – will address the issue of data management in public and private sector organisations, address cybersecurity and safety issues while transacting online.

He said that digital society and emerging technologies support development of high-level skills that will enhance the aptitude of Nigerians to use public data and anonymised private data for social good, towards creating wealth from data.

The minister further added that, “the academia and young innovative Nigerians such as those graduating have a key role to play in datafication to prosper the economy.”