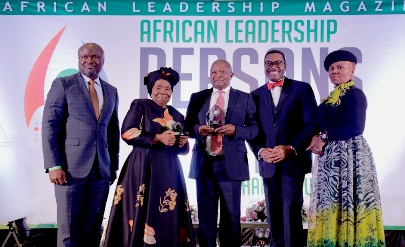 African business and policy leaders have jointly called for a more connected continent so as to harness Africa’s huge potentials and create jobs for its teaming young people on the continent. This call was made during the 8th African Leadership Magazine Persons of the Year awards gala, which held at the Sandton Convention center, in Johannesburg, South Africa.

Dr. Ken Giami, publisher of the African Leadership Magazine in his opening remarks, stated that, “In Africa, a continent perceived as a group of nations with weak institutions, poor infrastructure and some of the world’s horrific conflicts; the inspiring example and impact that one effective leader exemplifies is truly powerful and game changing, not just for the immediate beneficiaries but for the world.”

Continuing he maintained that, “Such leaders becomes a notable point of reference for what is possible, and also inspires a whole generation of upcoming leaders, who go on, hopefully, to solve some of humanity’s biggest problems in the future. That is why we have made it our mission to discover and celebrate these outstanding African leaders and institutions, and position them not just as agents of change, but enable them to continue to inspire and lead effectively, so our world become a better place for all.”

On his part, the President of the African Development Bank stressed the need for a connected continent. In his words, “with 12 million graduates entering the labour market each year and only 3 million of them finding a suitable occupation, youth unemployment has the potential to rise sharply.”

Continuing, the president maintained that, “considering the pace of change driven by the 4th industrial revolution, we must invest in re-directing and re-skilling our labour force. We must and we will prepare young people for the jobs of the future – not the jobs of the past.

That’s why the African Development Bank, as part of our Jobs for Youth in Africa strategy, launched the establishment of Coding for Employment Program. It’s designed to foster young digital entrepreneurs. We hope to develop 130 centres of innovation over the next five years to help create 9 million direct and indirect jobs,” he said.

According to the President, “we must also address issues of insecurity. Growth in West Africa has been dampened by the rising insecurity challenges, especially in the Sahel. Several countries in West Africa are spending a very high share of their budgets on security.”

While presenting his keynote, the Deputy President of the Republic of South Africa, His Excellency, David Mabuza, maintained that, “our resolve remains firmly that as Africans we must find ‘African solutions to Africa’s problems.”

He further stated that, “we are committed to playing our role with diligence within the African family of nations, driven by the desire achieve peace, development, social justice and economic progress for all on the Continent.”

The event was used to present the instruments of honour to winners of the 8th African Leadership Magazine Persons of the Year.  Awardees at the  evening included Dr. Akinwumi Adesina, African of the Year; Rawya Mansour, African female leader of the Year; Professor Yusuf Karodia, African Person of the Year Education development; Femi Otedola, African Person of the Year, philanthropy and charitable contributions, Ashish Thakkar, African of the Year, Employment Generation.
The African Leadership Magazine Persons of the Year, is Africa’s premium vote-based endorsement, reserved annually for the Africans who are contributing towards promoting the continent and positively altering her narrative. The event which is in its 8th year, has become a referendum of some sort by Africans on purposeful leadership in the continent. A shortlist of nominees are selected from results gathered via a Call for nomination – traditionally promoted via a paid online and offline campaigns across the continent, Europe, and the Americas. The call for nomination and subsequent selection of Africans with the largest number of entries in 7 categories, is followed by a poll on our website: www.africanleadershipmagazine.co.uk and our social media platforms – through which the winners emerge. 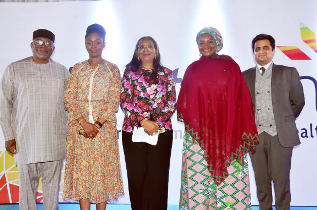