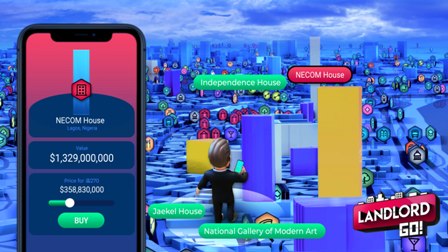 Walking down the street you notice something has changed. You take out your phone hastily, to check the available properties around you. Yes! There they are! New shares and you’re the first one to get them. You don’t think twice, cause you know you must have them! It’s not the first time when on your way to work you come across such valuable finds.

We’re all part of this virtual map. With more than three billion mobile devices on the planet today, trillions of data trails are left behind unused. Now you can enjoy this mixture of digital and real world in the Landlord GO game.

Landlord Go is a brand new game by Reality – that leverages these digital “footprints” in a fun and exciting way, allowing players to buy, sell, and collect rent on some of the world’s most famous buildings and landmarks.

“We have just launched an augmented reality game called Landlord GO, and after a few days we are the top app in Nigeria with more than one million players. Right now in Lagos, there are 13, 588 players making deals for virtual ownership of the 534,765 real properties. Landlord is a geo-location reality game that lets players buy and sell real-world properties. It’s like playing Monopoly and Pokemon GO in one,” said CEO, Reality Games, John Z. Woznowski to IT Edge News.

With over one million players worldwide, it’s the first real-world augmented reality game that uses real buildings, real people, and real prices to turn your city into an action-packed strategy game. With more than 13 588 players already making deals for virtual ownership of the more than 534 765 in Lagos already, there’s no shortage of fierce competition ready for action.

You walk your neighborhood every day, seeing familiar landscapes and buildings. Now you can view those daily sights in a whole new way by owning a virtual piece of your community. Whether you’re starting small or have grand visions to own the National Gallery of Modern Art in Lagos or the Empire State Building in New York City, they’re yours for the taking with Landlord Go.

Do you have unique knowledge of a part of your city that few others know? That local intel can translate into big profits in Landlord Go. If a new coffee shop is opening in your neighborhood and you think it’s poised to become the next Starbucks, put in a bid for it, and start raking in the rent payments from the crowds lined up outside the door.

Using a massive pool of data, including detailed information about more than half a billion real world properties, Landlord Go connects the user to their city in an exciting and innovative new way that no other game can offer.

Players can start small and quickly create a vast real estate empire through savvy investing. Put properties on the market, or engage in furious bidding wars with other players, recreating the experience of competing in the thrilling real estate market right from their phone.

Landlord Go is incredibly accurate, reflecting real-world values of properties using details like distance from the city center and building amenities. By using our own data set combined with NASA satellite scans showing nighttime light emissions, we’ve created one of the most realistic and data-driven property dealing games ever conceived.

You can really get the feeling that the level of realism is truly what sets Landlord Go apart. Anytime another player visits your property in real life, they pay you rent in the game. The more visitors your property gets, the higher its value. Using a proprietary AI and data platform called Big Dots, we’re able to add real-world data to any desktop and mobile apps.

The game is exciting as players see their fortunes grow and engage in sky-high value transactions, competing with other players for dominance in the real estate market. There’s nothing quite like it available today, and nothing that even comes close to the level of accuracy and detail found in Landlord Go. 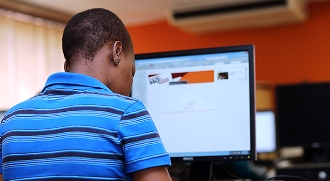