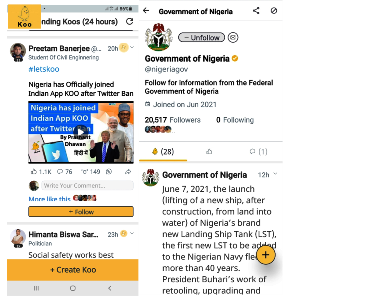 Nigerian government has signed on to India’s social media platform nearly a week after it banned the American Twitter. It now has a verified Koo account with more than twenty thousand followers which could significantly strengthen Koo as a global brand.

The platform had over $30-million injected into it by investors last month to consolidate its steady rise as an alternative platform to Silicon Valley’s Twitter.

“A very warm welcome to the official handle of the Government of Nigeria on @kooindia! Spreading wings beyond India now,” Co-founder and CEO of Koo, Aprameya Radhakrishna tweeted this Thursday to announce Nigeria’s entry and an important march to becoming a global alternative for Twitter.

Koo is an Indian microblogging and social networking service based in Bengaluru, India. “Koo, owned by Bombinate Technologies, has been touted as India’s alternative to American tech giant Twitter, after it was founded in March 2020.”

Abuja switch to Koo is happening even as it begins its plan to regulate social media platforms.

“The National Broadcasting Commission hereby directs every Online Broadcast Service provider and Social Media Platforms operating within the Nigerian State to apply and obtain broadcast Licence for their Service(s),” an advertorial by the broadcast regulatory agency announced this Thursday.

Government’s new rule will also require that Koo is registered locally as a company.

“The Nigerian government’s decision to join Koo after banning Twitter reinforces its position as an alternative platform to Twitter. Even in India, the progress of Koo came in the backdrop of the Indian government’s several disagreements with Twitter,” The Indian Express reports.

The report notes that Twitter has been having a running battle with the Indian government over tweets deemed as offensive by New Delhi.

Twitter refused to remove the tweets or suspend accounts deemed unlawful. Twitter’s non-compliance has led to friction with the government which has also insisted that Twitter must comply with “India’s new IT rules for digital media intermediaries “or face outright ban.

Many critics including the country’s opposition party, People Democratic Party (PDP), have condemned the indefinite ban as infringing on the rights of citizens to free expression. The US and EU envoys have asked that the decision be rescinded.

This week, Information and Culture Minister, Alhaji Lai Mohammed, in a media interaction, announced that Twitter has reached out to address the friction.

The government has set conditions to unban Twitter even as it asked all government ministries, departments and agencies (MDAs) to delete their Twitter accounts.

The micro blogging site must register as a company in Nigeria and must be willing to be locally licensed to operate by the NBC including ensuring that its platform is no longer used to promote anti-Nigerian activities.

“First and foremost, Twitter must register as a company in Nigeria,” said Mohammed.

Artificial Intelligence (AI) in Education Market to grow at 45%