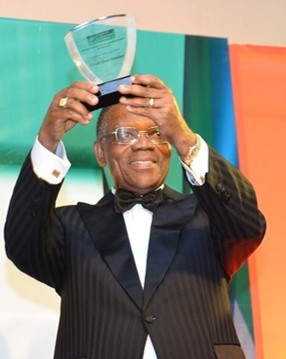 Chief Don Obot Etiebet, a pacesetter across multi-industries and the man who launched the first indigenous computer in Nigeria, is 77 years today.

Chief Etiebet was born on 15th September, 1944 in Ikot Ekpuk, now under Oruk Anam Local Government Area, Akwa Ibom State.  He has evolved in the past decades to be an active participant across different social and industry verticals. Scientist, academic/lecturer, businessman, politician, and former Minister of Petroleum and Mineral Resources, Etiebet has etched milestones across the people and the spaces he has played in.

One of those milestones is that he pioneered the computing and information technology business in Nigeria.

As one record shows “Etiebet owned the first indigenous company involved in the use, production, marketing, installations, maintenance and training, and also in developing of applications for hardware and software computer systems in Nigeria.

“Data Sciences, a company he incorporated in 1979 started to assemble Obodex PCs, in 1992, the first ever Nigerian brand name in personal computers which took the market by storm and became the largest computer company in Nigeria, delivering and maintaining mainframe computer systems for the IOCs, the banking sector, all the examinations bodies, power and telecommunication sub sectors in Nigeria and outside with the cutting edge technology solutions from Digital Equipment Corporation (DEC) of North America of which his company enjoyed unchallenged distributorship.

It is significant part of our national history that Data Sciences Nigeria Limited, within the corporate corpus as OBODEX Nigeria Limited, launched the Obodex PC, all assembled in Nigeria as the first ever Nigerian brand name in Personal Computers.

Over 40 years after, Data Sciences still stands like an Oak referencing Nigeria’s evolutionary journey to where it stands today in the 21st century as a country with huge number of young tech innovators.

Between the mid-60s to the early 70s, Etiebet obtained B.Sc. (Special Honours) Degree in Petroleum Technology and an M.Sc. Degree in Applied Geophysics. He was at various times a Science Teacher and a University Lecturer before venturing to set up a Earth Sciences Limited, a resource engineering and geophysical exploration company that applies computer techniques for mineral exploration.

Chief Don Obot Etiebet also etched his name in ICT activism. With two university professors in 1977, he started computer awareness and literacy programmes in the country by founding of the Computer Association of Nigeria (COAN). The COAN which was inaugurated in May, 1978 is now known as the Nigeria Computer Society (NCS) and has remained the only professional computer body providing an umbrella for the practice of the profession in all its ramifications in Nigeria.  The NCS is also now backed by a law setting up the Computer Professional Registration Council of Nigeria (CPN). Chief Don Obot Etiebet is a life Fellow of the two computer bodies: The Nigerian Computer Society (NCS) and The Computer Professionals Registration Council of Nigeria (CPN).

A grassroot politician, he holds many important chieftaincy titles in Nigeria, including the Atuekong Annang, one of the highest titles of his ethnic Annang sub group,